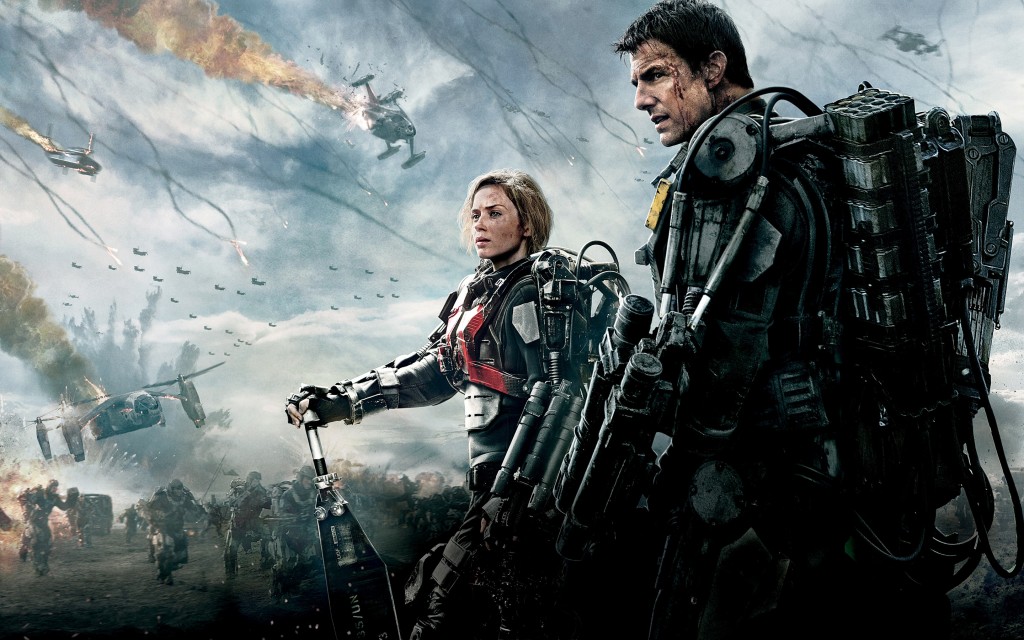 After two years of sub par offerings (Oblivion, Jack Reacher) Mr Hollywood finally delivers on a summer blockbuster that lives up to the caliber of his star power. Edge of Tomorrow, a film based on a Japanese graphic novel (nothing’s new anymore), is probably the first blockbuster for the summer that doesn’t feel like something you’ve seen already. Yeah the movie has source material and yeah the “mimics” call to mind the “sentinels” form The Matrix, but the story in this SC-Fi feels refreshing. Considering the film’s actual plot though, that description isn’t without irony.

I don’t need to give to much away since the trailers lay it out for you; Tom Cruise plays a soldier with no military training. Within 5 minutes of being launched into battle he is gruesomely killed but miraculously wakes up the day before like nothing happened. He’s basically Kenny from South Park or Bill Murray from Ground Hog Day, except the fate of the human race lies in this guy’s hands.

The look for the film is terrific. The scenes of the battle  on the beach are as chaotic as Saving Private Ryan. The battle suits and all it’s features were fun to watch and Emily Blunt hacking aliens up with a giant sword is fan-boy heaven on a global scale. Despite the surrounding noise the narrative still keeps it’s focus intimately on Cruise and Blunt. The roles don’t call for Oscar worthy performances but Cruise played the roll of bumbling rookie to reluctant hero well with the necessary humor to match. Bill Paxton gets some fun screen time as well bringing comedic relief as a drill sergeant leader.

Edge of Tomorrow, though I’m sure many would disagree, is definitely the best summer movie to be released so far. The story was refreshing enough to keep you engaged and more importantly it wasn’t another sequel in a drawn out franchise. Oblivion was boring as hell and Jack Reacher was any Jason Statham movie released in the last 5 years. Edge of Tomorrow is cool and a throwback to what summer blockbusters used to be.