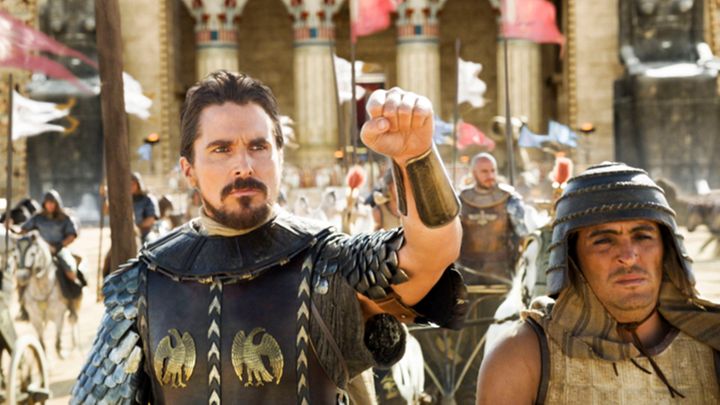 There’s no denying Ridley Scott knows how to make a movie. From hybrid aliens to Harlem gangsters, from the Coliseums of Rome to the forest of Nottingham; when it comes to film-making, Scott is a director with a diverse resume. No stranger to the sword and scandals genre, Scott returns with his latest offering: Exodus: Gods and Kings. As the name implies, Exodus tells the biblical tale of Hebrew orphan Moses; foster child to the Pharaoh and future liberator of the Jews.

This isn’t your grand parent’s Ten Commandments though, rather than a simple retread of classic biblical cinema, Scott approaches this well-known fantastical tale from the perspective of a realist, or at the very least a skeptic.

Christian Bale plays Moses (A modern day cinema sin depending on who you talk to), but instead of the “meekest of all the men” we get a seasoned general in the Pharaoh’s army, who though respectful of his country’s practice of deity worship, doesn’t shy away from expressing his skepticism and preference for logic over blind faith.

As the story inevitably goes, Moses learns of his Hebrew ancestry and is hastily exiled from his adoptive family and home. Once spending some time in the merciless desert, he stumbles upon Midian where he settles down and starts a family. This peace is short lived though, as Moses is soon recruited by God to return to Pithom to free his people.

The main points of the story remain mostly in tact, but the creative liberties taken during the journey from Memphis to the Red Sea are really what make this biblical telling a bit more contemporary than its counterparts. The forgoing of unnecessary exposition and plot narration was a nice gift too.

First off, instead of just the traditional burning bush, God also takes the form of a young boy called Malak, and Malak comes across just as much a spoiled brat as he does our omnipotent creator. The discourse that follows between Malak and Moses is interesting to observe. As much a science project as it is revolution, we get the impression from God’s and Moses’ conversations – that God may not have it all figured out, but is definitely tired of being totally ignored by the ruling half of the population.

Soon, the siege on Memphis takes place and the ten plagues follow. This is where the film cranks its aesthetic decadence all the way up. From the first frame of this film, the city of Memphis is a sprawling beauty to watch. From the wardrobe to the set design; everything shines, glimmers and towers over the audience in neatly crafted 3D. Scott also goes crazy with the aerial shots. When the plagues begin, these same locations are given a horrendous make over when a domino effect takes place regarding the plagues that slyly uses logic and biology to lend credibility to the events.

As far as the actors go, it’s really Bale’s show. Aaron Paul probably gets all of 5 lines of dialogue as Joshua and Ben Kinsley as Nun is delegated to staring hopelessly into the distance. Joel Edgerton does well as Ramses though. While movie villains these days tend to be a bit one note, Edgerton – with his heavy eyeliner and jersey shore tan – brought a quiet noise of insecurity to the ultimately dim witted and bratty Pharaoh. This approach painted Ramses, not as an overtly evil ruler but just one who was a bit too used to the idea of unending free labor.

A few other stray observations were the more modern take on both biblical dialogue and the Egyptian society itself. For a film depicting life “Before Christ” it all seemed rather sophisticated. Like Aronofsky’s “Noah”, Ridley anchors as much of Exodus as he can in “reality”, so that when he gets to the brimstone and fire we can be just as amazed as the Hebrews and the Egyptians are.

All in all, whether it was God parting the Red Sean or it was simply a perfectly times tsunami, Exodus: Gods and Kings makes Moses question enough of his life beliefs to make the audience think about revisiting there’s or the lack there of.