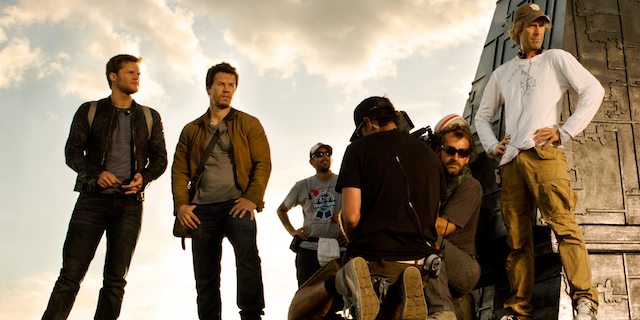 Michael Bay “out-bayed” Himself with Transformers: Age of extinction. You can never imagine how  much more indulgent Bay can get with each of his releases, but he always manages to trump himself and T4 is no expception. All the Bayisms are there, he just does it bigger and louder… and for longer. You want slow-mo? Check! You want low angle shots of people stepping out of cars? Check! American Flags? Check! Indestructible protagonists who should be dead from the first ridiculously violent interaction with a transformer? Check! Explosions? Check Infinite!

The man once said he was only interested in making movies for teenage boys and Bay shows to be a man of his word. 4 movies in we already know the drill: Something bad is going to happen and the Transformers are going to run around shooting everything, kill the bad guy and bounce. Come to think of it, the Transformers are just like Godzilla except they could talk and rationalize why they had no choice blowing up half of Chicago. This movie makes twice for Chicago destruction. But that’s what we come to see right? There’s no extensional-isms and there’s barely a plot but this time the robots are voiced by A-list actors and you can finally tell them apart.

For the human side, I kind of missed Shia Labouf as Sam “Witwicky” in this go around but Mark Walberg’s “Cade Yaeger” (that name is its own special kind of ridiculous) filled the gap well enough.  Cade is a Texan sans the southern accent, with a smoking hot 17 yr old and a dream to be a great inventor, which I personally thought was hilarious because only Bay would cast Marky Mark as an inventor. Like Will Smith in the Pursuit of Happiness he’s a crappy one and is dead broke.

Enter buying Optimus Prime and as usual everything goes to hell and all that character background is forgotten.

The 3D is honestly crazy, and after 4 films Bay finally has found a way to make his kung-fu kicking robots’ fight scenes a lot cleaner than they used to be. Frasier/ Kelsey Grammer plays the main human bad-guy and a new villain in the name of “Lockdown” replaces the repetitive Megatron. The colors, scale and epicness of this movie is almost magical and the action, just like the “Dark of the Moon”, is mind numbing and would probably give your grandmother a seizure. The movie’s biggest flaw though is it’s length, at almost 3 long, transform sound effect consuming hours it could get a bit exhausting and also, don’t hold your breath on understanding plot or why any of what you see is even happening until probably an hour and a half in. Don’t worry though, like Bay said, if you’re a transformer fan or a thirteen year old, you’re probably not going to care.

John Goodman and Ken Watanabe voice the new autobots and Peter Cullen, of course resumes his role as Optimus Prime. Bay made this movie super-duper huge, so if you’re a junkie for a mega-sized blockbuster which more than likely you are, treat yourself to a pair of 3D glasses and strap in for what every boy dreamed about as a little boy:

“Robots in disguise kicking each others asses unmercifully while reigning down trillions in property damage through the streets of Chicago all the way to Hong Kong”, a point which is brought up in the movie itself by the way as it is the “it” thing to do these days in superhero movies.