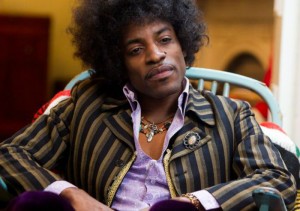 It took some serious wrangling but the Jimi Hendrix bio pic starring rap group’s Andre Benjamin was finally green-lit and now we get a glimpse of what’s in store via it’s first trailer. It wasn’t all gravy though, Jimi Hendrix’s estate still didn’t agree with the making of the movie so Hollywood had to do a bit of side stepping to get the train moving. The official title is JIMI: All Is By My Side and actually focuses on the legendary musician’s life before making it big. Reasons for this included the issue of not being able to license any of Hendrix’s music.  Instead, as a work around, they document his years as a cover artist when he used to play other people’s music. After watching the trailer the film looks interesting and 3000 or Andre Benjamin as his billing states definitely embodies the role down to the voice. Supporting casts in the film include Hayley Atwell and Imogen Poots, and the film has a release date of September 26. Check out the trailer below: